First post on the forum, so I thought I would introduce my TC Max which I have had a since september. I have made a few mods, mostly cosmetic.

So far I have removed the pillion passenger pegs. Removed the stock number plate holder and trimmed the rear fender and fitted a R&G tail tidy. Replaced the stock mirrors with some bar end mounted ones. Painted the rear side panels silver. Lastly for the moment I have replaced the rear shock with a 290mm DNM MK-AR adjustable shock using the stock spring this raised the rear ride hieght slightly and has massively improved the ride.

Plans for the future include getting some more performance from the stock motor using a Golden Motor VEC300 controller and upgrading the battery BMS to a higher current capable one.

I use the bike to commute everyday and have really enjoyed it so far. Come the better weather I am sure I will use it a lot more.

I'll update this thread as I continue to play about with the bike.

I managed to get a bit of time with the bike today and have made some progress with altering the performance to better suit my needs.

it appears that the stock controller is running the lingbo software as with the software (downloaded from here:- https://drive.google.com/drive/folders/1ZBXscIUssj2y7akjxSmxm30SJVLfPGCa ) , I am able to read and write parameters to the controller.

So now I need to work out what parameters I need to adjust to achieve the results I am after.

I shall be back when I have further information.

@petesscalefabshop I plan to upgrade the original driver to 15KW. Replace battery, transistors and shunt resistor. I would like to unlock the top speed. Is this program https://drive.google.com/drive/folders/1ZBXscIUssj2y7akjxSmxm30SJVLfPGCa and super soco interface enough?

It'll be interesting to see what can you do with it.

I have had a quick look at the stock settings and the motor is limited to 3000rpm in the software. The battery current is set to 80A but I am not convinced that it is actually able to pull that much from the battery. I think the BMS is limiting the current to around 70A. Need to hook up an ammeter and see what is actually being drawn.

Once I have this information I am going to look into bypassing the BMS on the discharge side which should allow the controller to pull closer to its limit of 110A which should increase the output power to around 7Kw.

I will also upgrade the battery connector and cables to handle the higher current draw and to a larger circuit breaker or fit a large fuse (200A) at the battery.

Hi Pete. Great to see another tinkerer on board. I'm new here too and hoping to do some reverse engineering myself. Thanks for sharing your info so far. Look forward to see how you progress. Your bike looks great with the hugger mod. Must have taken you ages to trim it down nicely.

I've started building a battery upgrade for my TC Max. I'll post some pics once I get all the parts together.

Hi, The hugger mod was actually pretty simple and quick to do. I just used masking tape to mark the curve I wanted and then having removed it from the bike cut it with a 4" angle grinder and used a file to tidy teh edges. Upgrading the battery is a good place to start, I think one of the big limitations is actually the stock BMS which I believe is limiting the battery output current to around 70A. My plan is to bypass the BMS on the output side to allow for greater current output.

Nicely done. Angle grinder always handy to have around!

Ah that's interesting. So you don't think the controller is limiting current? I've had my battery partially in bits but didn't dare remove it from the case completely....Yet. It seems to be bonded in there. I was wondering if you might have to slide something sharp down between the case and the cell carrier to cut through the silicone glue. Might be more tempted to have a go once I've built the new battery. The BMS I've got for the new pack is 100A.

I've found if you try to put a load on the battery other than the bike, the BMS cuts the output. Another good reason to bypass or replace the BMS!

Decided to just go for doing the BMS bypass, as I haven't had time to fit an ammeter to the bike and then ride it.

So first off I removed the sticker from top to reveal the T20 torx screws underneath. 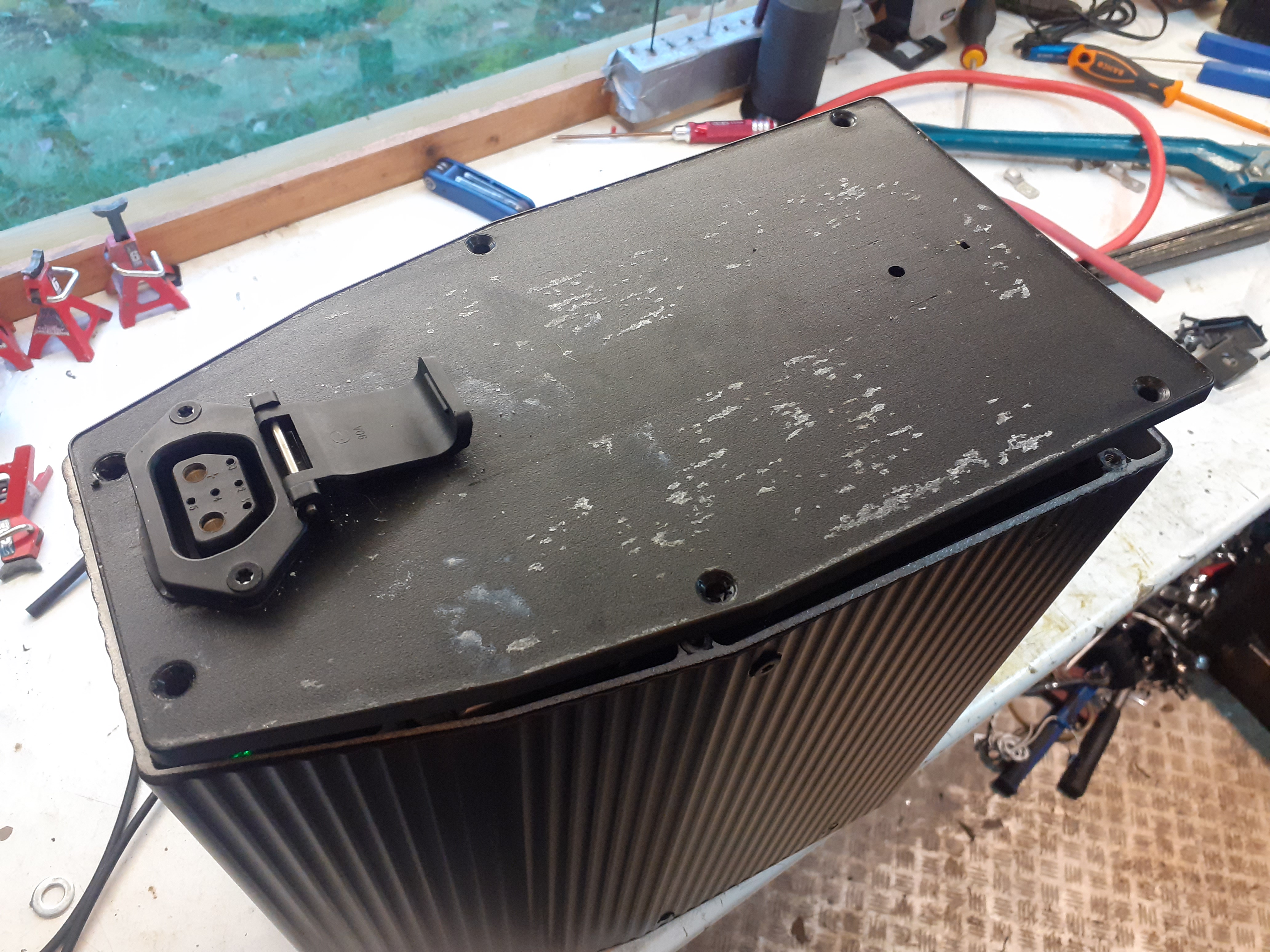 and then the four on each side, two at the top and two at the bottom. 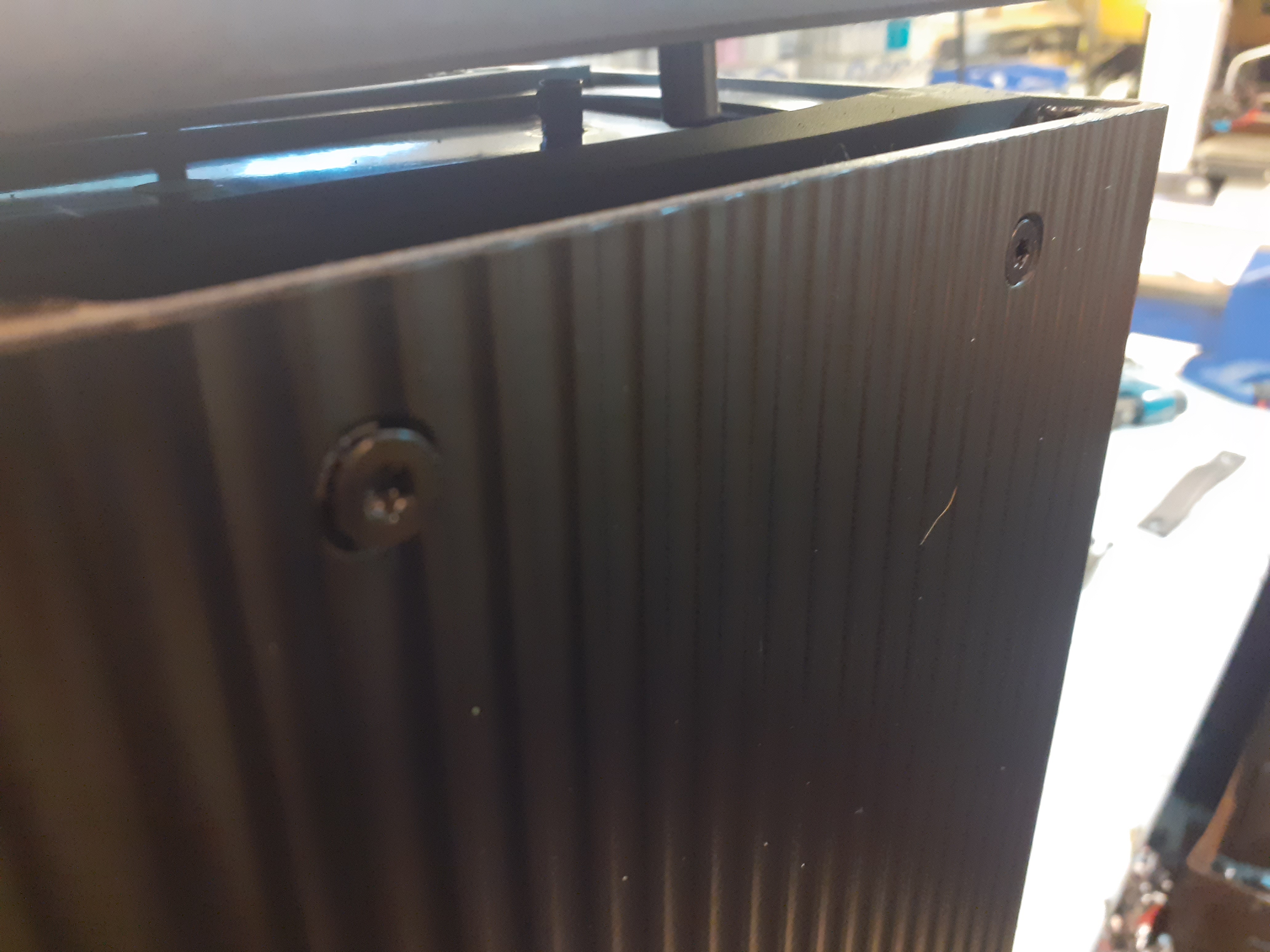 Then carefully flip the battery over and remove the screws from the bottom plate and remove. 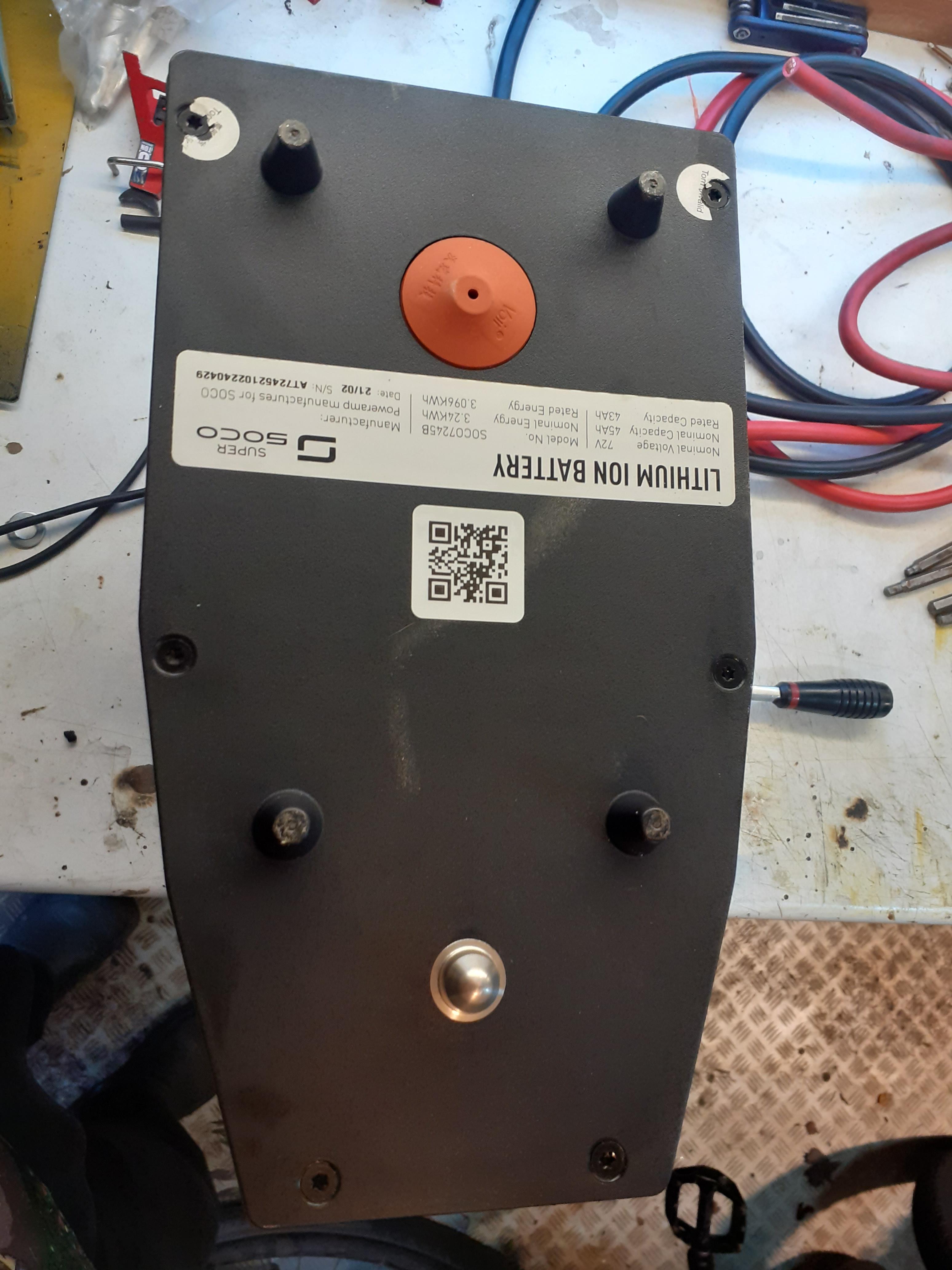 Turn the pack back up the correct way to remove the outer aluminium shell.

and you end up with this. 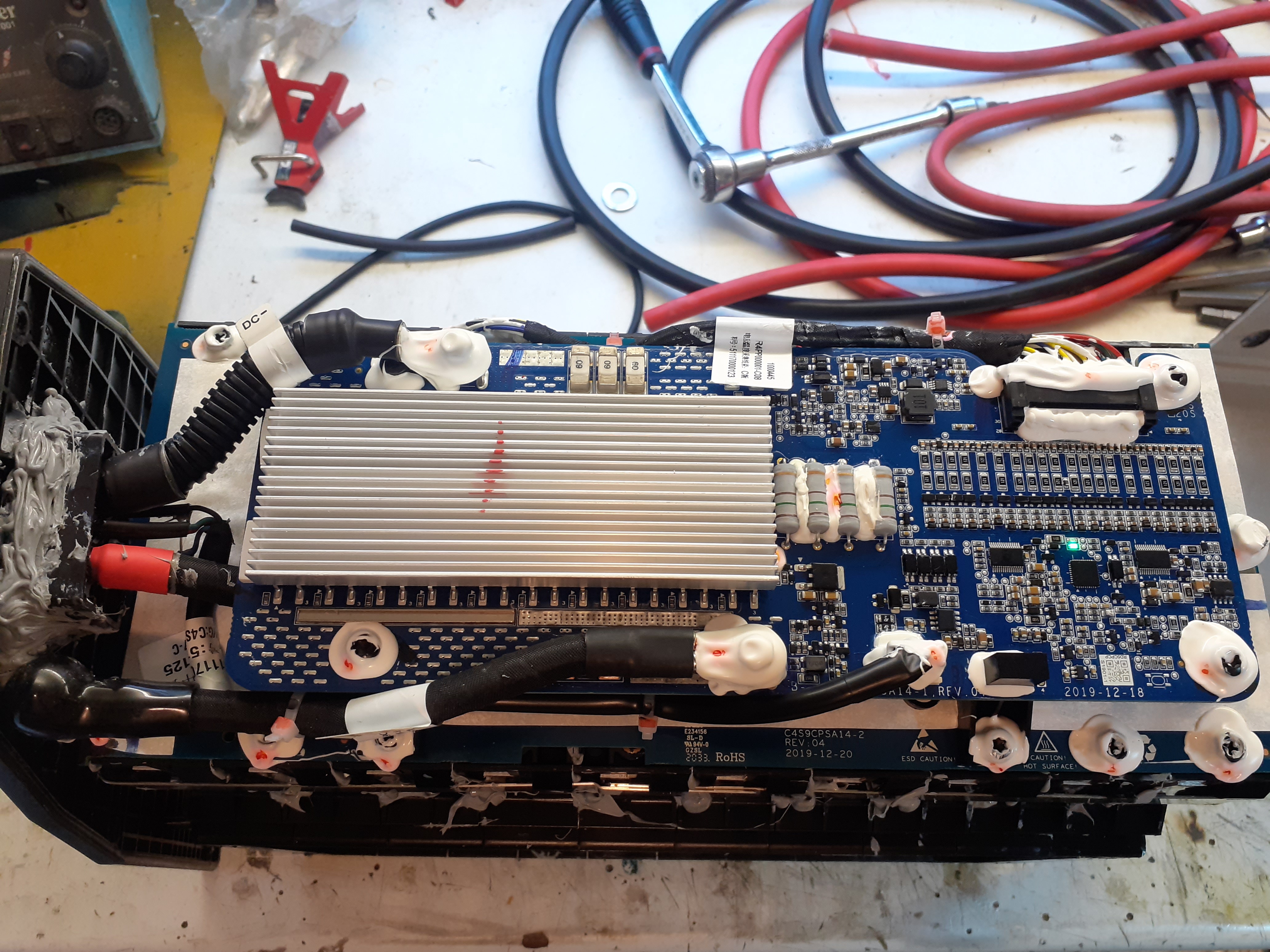 looks like the main battery cables are really quite small, around 16mm2 I would guess.

With the BMS out of the way the main positive cable was disconnected and the top plate put to oneside.

As I am upgrading the cable to 35mm2 I modified the plastic standoff that the BMS is mounted on using a dremel. The new positve cable was then installed. 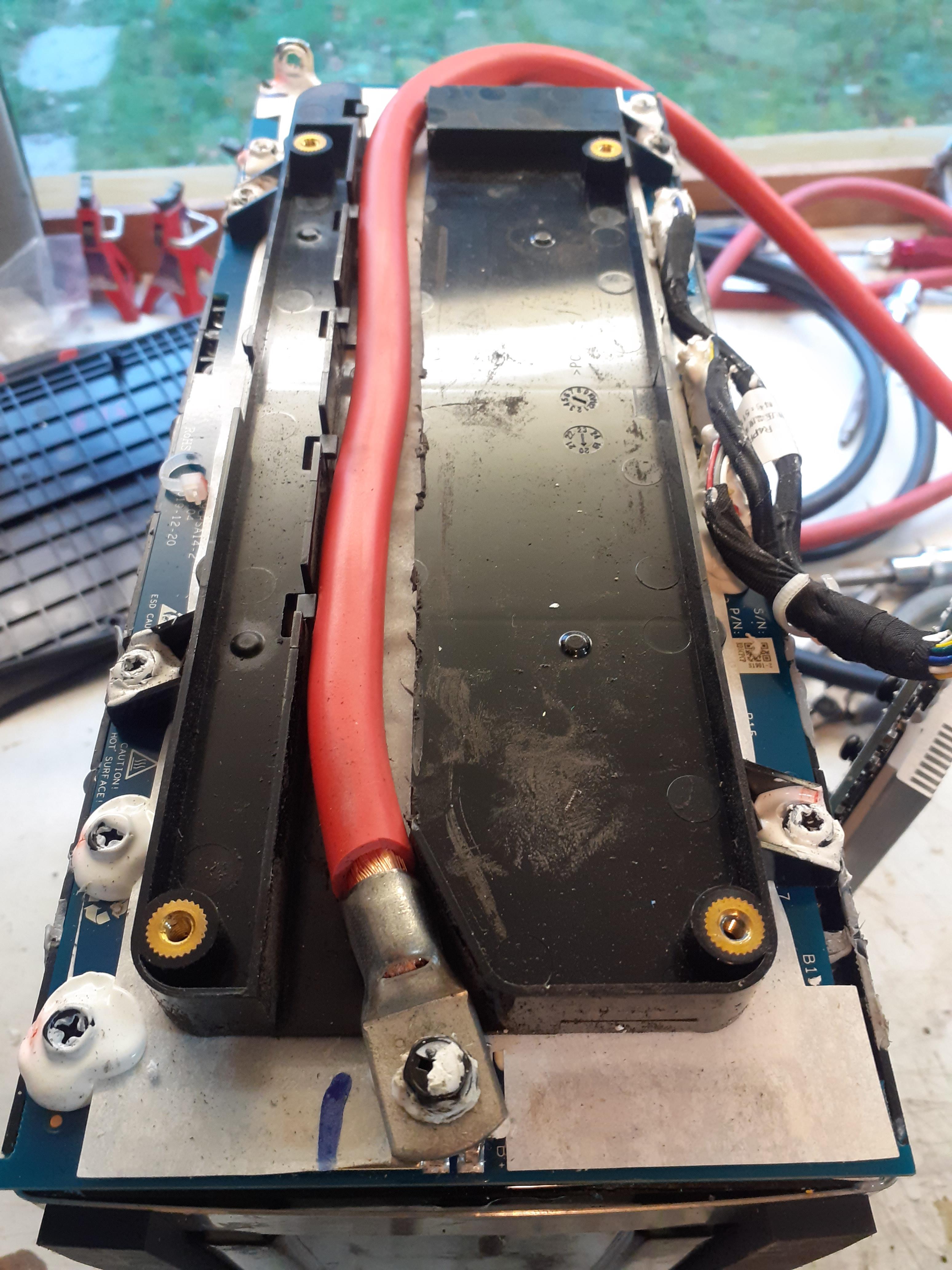 The BMS was then reinstalled along with the new negative cable. 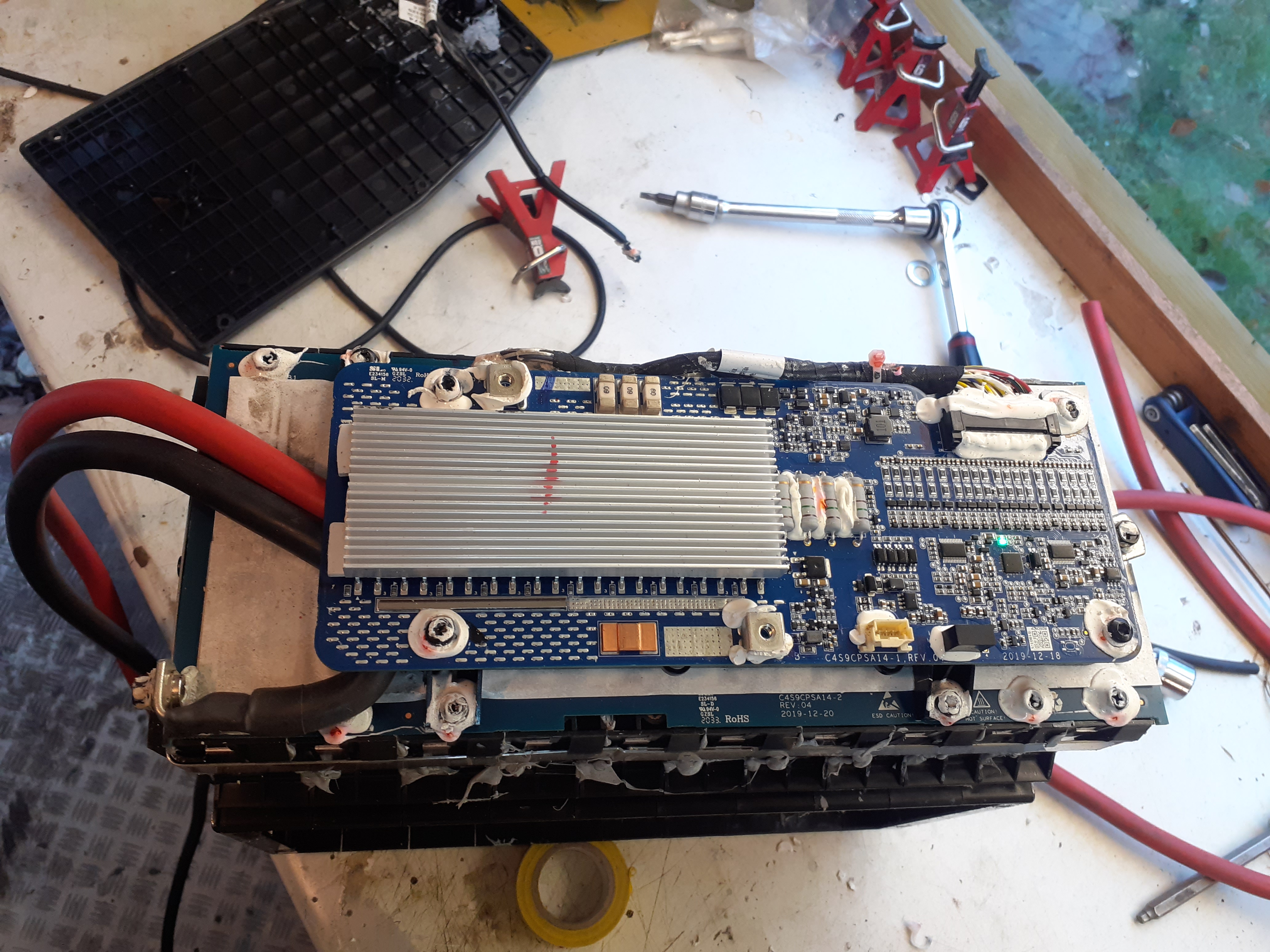 That's it for now.

The next step will be to make some new charge cables to run from the socket to the BMS and then try and get it all back in the case.

The new battery connectors I am going to use are these 175A Anderson type. 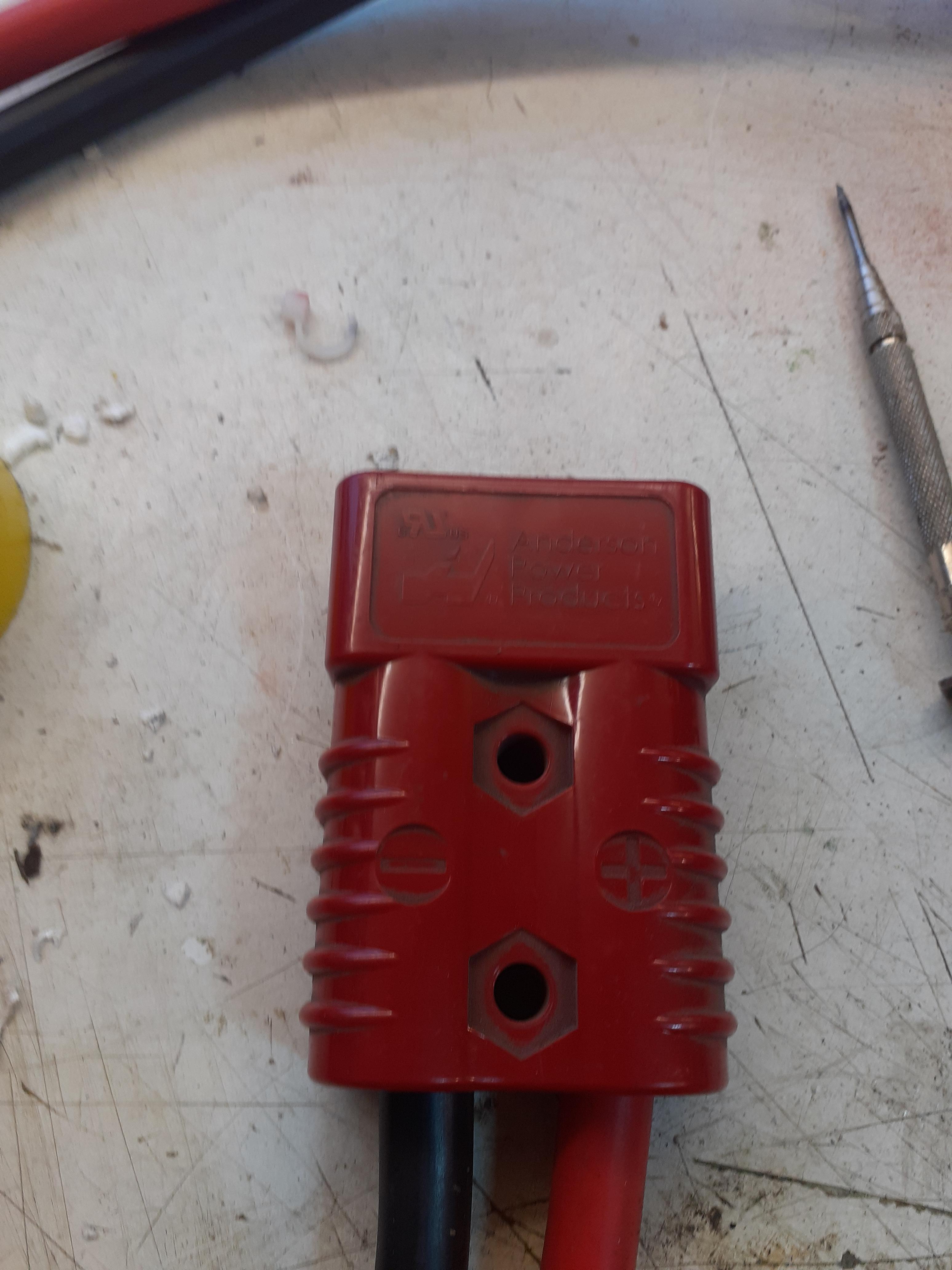 More to follow in the next couple of days.

@petesscalefabshop  that’s a real nice break down of the battery. You should stick your progress on the super soco Facebook group too. There will be lots of interest there.

im in the process of boosting my tc max too with a new motor controller, battery and upgrading cables. What power you looking for as Iv swapped out my main cables for 16mm2 from 10mm2 original, which should be good for 140a continuous and peak a fair bit higher. I’m not sure the motor will be able to handle much more.

I like your idea of BMS bypass, any ideas to if the stock cells are capable of much more discharge current?